Once upon a time there was a house – just an ordinary house on an ordinary street. Although I lived there for the first thirteen years of my life, I never thought about it much. It was just a house, a two story brown brick house with a bay window in front and a concrete porch protecting the door, much like most of the others on the street.

Although I assumed the other houses were all like mine, in fact, my friends and I rarely got to see inside each other’s houses. Mostly we just stood outside and called for each other at the top of our lungs until some exasperated parent (usually the mother) shoved the sought after child out the door. In the pre-television forties, the outdoors was our playground. We played an abbreviated form of baseball, called ‘Tippy’, in the street and ran about in hide and seek games through our neighbours’ back yards. The street’s gradual slope made it perfect for roller skating. We fastened our skates on to our shoes and adjusted them to fit with the special key that lengthened or shortened the shaft and then off we would go, clickety click over the paving stones to collapse, laughing, on the lawn of the house at the bottom of the street, much to the annoyance of its owner. Sometimes we decorated our tricycles with crepe paper streamers and attached pieces of cardboard to the spokes with clothespins to make a satisfying clacking sound. Then we took over the sidewalk in a street wide tricycle parade

Our short street connected two cities, Kitchener and Waterloo, which blended seamlessly into one another. Our house was approximately in the middle. When I was born, our address was 140 Earl St. However, through some planning mixup, there was another street with the same name very close by which caused much confusion for the mailman, let alone emergency vehicles if they were ever needed. Since our street was the shortest, the town fathers changed its name. We were the only family I ever knew who got a new address (26 Severn St.)without having to move.

The Waterloo end of the street was an unfamiliar place, as the children who lived there went to a different school and we did not have much to do with them. My father drove down to the Kitchener end and temporarily disappeared from our lives to his office in the Mutual Life Insurance Company. The two ends of the street provided the boundaries of our play as we were strictly forbidden to venture beyond them.

Even in winter, we spent as much time outside as possible.   The snowplough would pile up huge banks of snow on the boulevard between the sidewalk and the street and my younger sister and I dug ditches in them from one narrow end to the other, carving them into ships with a prow and a stern that 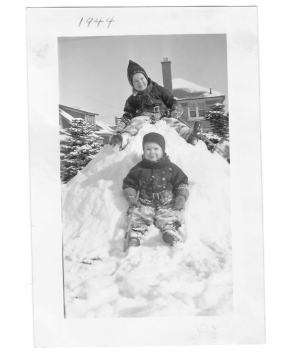 would carry us off on imaginary adventures. Once, as we sat on the porch steps resting from our ship building labours, my sister took it into her head to taste the black, licorice looking surface of the iron railing that edged the porch. Her tongue stuck fast and her shrieks brought my mother instantly to the door. She was back in a moment with a pitcher of warm water and released my sister from her unexpected captivity. Sobbing, she rushed for the protective warmth of the house with me close behind.

My mother ushered us down into the bowels of the house where the grey and forbidding cellar was home to the coal furnace and my mother’s ringer washer , an object with which my sister and I were not well acquainted. Here she divested us of our cumbersome galoshes that fit over our shoes, and peeled off our heavy wet woolen snow pants and jacket. They were hung on a line by the furnace where they quietly steamed away until dry enough to be piled on to us once again.

The enticing fragrance of freshly baked chocolate cookies drew us up the cellar stairs and we gobbled them up along with a cup of hot chocolate at the old wooden table in the breakfast nook, a small anteroom off the kitchen where we ate most of our meals.

The kitchen was my mother’s domain. It was modern for the times, with an electric stove and a fridge that contained a freezer compartment big enough to keep a tray of ice cubes and a carton of ice cream. Some of our neighbours still had ice boxes and large blocks of ice were delivered to them by truck in the summer. We children followed the truck and snatched chips of ice to suck from the tailgate while the driver was making his deliveries. Milk and bread were also delivered to the door by horse drawn wagons. The docile horses moved on their own from door to door following the delivery man down the street. This was such a common sight that once on a country drive, when we passed a group of horses grazing in a field, I exclaimed, “My, just look at all those horses without their wagons!”

Our bread delivery was stopped when the delivery man got fresh with my mother. I was not sure just what this entailed but knew it had nothing to do with the state of his wares. After that, we got our bread, as we did most other groceries from the corner store,. If the order was too big to carry, the proprietor, aptly named Mr. Grosz, delivered part of it packed into a basket on the back of his bike. Meat came from Mantz’s meat market in Kitchener and was left in the milk box by the back door.

My mother was a good cook but a reluctant one and usually banished us from the kitchen in order to work more quickly and efficiently, especially when preparations for a special event were taking place. On occasions such as Thanksgiving, Easter, Christmas and family birthdays, our guests were my mother’s sister, her husband and daughter and my grandmother who shared a duplex in downtown Kitchener and with whom such dates were celebrated turn about. My father’s relatives lived farther away so their visits were fewer.

In preparation for a larger number to be seated, my father would crawl underneath the table and release the catch that held the two sides together. Then he and my mother would pull the table apart and insert the leaf. To protect the table’s highly polished surface, my mother would bring out a thick quilted cloth which she called a sounder. Over it went the linen table cloth and then her best china dishes and silver plate. After dinner, the women would clean things away and join the men in the living room to visit. We three girls would escape upstairs.

We each had our own bedroom where our toys were kept. We had a favourite game in which our beds were imaginary houseboats on which our doll families took elaborate vacations. The three bedrooms opened on to a landing protected by a green carpet. On this ‘grass’ the dolls held their picnics and if they wanted to go swimming afterwards, there was always the bathtub, which made a realistic pond. Our rubber dolls enjoyed this activity the most. If we needed a school or a hospital as part of our game, our play was allowed to spill over into my parents’ room as long as we tidied up afterwards and stayed out of their dresser drawers. I think this rule was instituted after the time that my other, coming up stairs with a load of laundry, caught me coming out of the master bedroom after a clandestine foray.    From my fingers dangled a newly opened condom. “Mommy,” I cried, running toward her in great excitement, “Can I have this for my dolly?”

My mother was the heart and soul of the house. She was always there to bandage our wounds and listen to our woes. My father was our conduit to the wider world. On Sundays, our favourite activity was to go for an afternoon drive. Behind the wheel of our big black Pontiac, my father explored the back roads around our small city. If we were lucky, we would come upon a country school with a picnic table where my mother could spread out the picnic she had prepared and we children could play on the swings. Lacking a table, we often munched our food sitting on the running board of the car.

If there were rules, we learned them more by example than by lecture. We went to church and understood that our parents agreed with what the Sunday school teachers taught – it was wrong to lie, cheat and steal. If we made a promise, we were honour bound to keep it if at all possible. It was important to be polite to our elders and not to make a nuisance of ourselves. Following these precepts, we led singularly happy lives.

As children, we were protected and insulated from the adult world. If my parents had problems, they concealed them from us. For the first six years of my life, there was a war on and my father was in the reserve but if my parents worried about this, they gave us little indication. My parents loved one another and they loved us. They had no money worries as my father worked for one company his entire working career . It paid him a satisfactory salary so that our needs were taken care of and even some wants as well, such as trips and cottage vacations.

The house of my childhood was like the one described in an old hymn –“ made of walls so firm and stout to keep all want and troubles out.” In the thirteen years that I spent in that house, voices were seldom raised in anger, there were no serious illnesses, and no-one died . Inside it, I was safe, allowed to grow and become myself, surrounded by what the psychiatrist Carl Rogers calls “unconditional, positive regard”.

A little boy once said to me, ”Home is the place where they love you no matter what you do.” Throughout many trials in my adult life since then, I have been sustained by the remembrance that I once lived in such a place.