It’s discouraging to think that, since the Wizard of Oz was released as a feature film, the foremost image in North Americans’ minds of dwarfism has been the lollipop kids. Comical, childish, awkward, short—it wasn’t wrong to cast those roles as the filmmakers did, rather it’s regrettable that no alternate images of achondroplasia have since risen to the level of public consciousness. Even in recent decades—with movies like Time Bandits, Jason Anũna, or the show Life’s Too Short—popular culture hasn’t served to broaden a general understanding of stature and, more generally, physical disability. 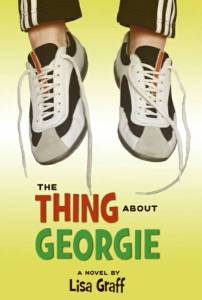 When we think of knowledge translation we are thinking very specifically of knowledge within certain settings, that is, the research setting and in the clinical setting. At the same time, though, there are examples of knowledge being translated in a much broader arena–popular culture–in some delightful ways. A great example is the young readers’ book The Thing about Georgie by Lisa Graff. Georgie has achondroplasia, something that is met head on from the very first page. Sections of the book begin with an aside, asking the reader to reach their arm across the top of their head, or to rest their head on their knees, and it is noted that these are things that Georgie can’t to. “It doesn’t bother him not to be able to rest his head on his knees when he needs to do some thinking,” the narrator says. “But the thing is, he can’t.”

Those are asides, set apart and addressing very frankly the curiosity that a reader will naturally have about difference. The bulk of the book is about Georgie and his very typical struggles in grade school. Yes, he has trouble participating in some things, and that rankles, but he finds ways to participate and to have his voice heard. We see that, just as our experience of not being picked first for the baseball team, we all struggle with those things. Nobody’s perfect.

It’s a lovely book because it translates the experience of achondroplasia to kids who are unfamiliar with it while showing that physical difference is something that exists apart from who Georgie is as a person. His desires and frustrations are the same as ours, as is his intelligence, his thoughtfulness. He also isn’t any more funny or comical than anyone else. Graff’s story is a representation of life that is truer to the experience of those who actually live with disability. Georgie isn’t comical, or less intelligent, or less thoughtful, or perpetually childish. He’s just a kid. The story also isn’t saccharine or overly earnest—Georgie has his faults, too, and makes mistakes, and we see that he is as fallible as the rest of us as well.

One thought on “Reading Disability”