Twenty-five men, 350 pounds of supplies, and a chance to change the world.

“This was not simply some new Arctic expedition,” says historian Michael Robinson, “this was really an attempt at a new science of the world.”

It was the international polar year, and fourteen expeditions set off to collect data about the world. Together, they would offer a clearer view of the earth’s climate than anyone had ever had before. Some of the data, including that gathered by the Greely expedition, is still valuable to us today, if not quite for the reason that those involved in the expedition intended. It’s a gauge of climate change, and we’d be the poorer without it.

Adolphous Greely was mesmerized by what involvement in this kind of study could mean, and he dove in, seizing the chance to be exceptional. Under his guidance, and taking 25 men and 350 tonnes of supplies, the expedition set off for Lady Franklin Bay, arriving on August 26, 1881. They had everything they needed and, after the Proteus weighed anchor for ports south, they were free of one thing that Greely thought that they didn’t need: a ship. Until a ship returned to pick them up in a year’s time, they would be cut off from the world in every possible way. Like Robinson Crusoe, the rest of the world would cease to be.

Unlike Crusoe, they were in one of the harshest, least fecund environments you could ever hope to find. “Pee freezes before it hits the ground,” says Jerry Kobalenko, “and even your breath condenses into little crystals that snow down and fall on your sleeve.”

Still, Greely watched the Proteus sail away and later wrote, “I am glad the ship has gone … it settles the party down to its legitimate work.”

He believed that, given the harsh conditions, any ships would be considered “cities of refuge,” places to escape to should the going get rough. When confronted with the difficulty of the task at hand, Greely feared that the crew would choose to sail rather than to stay. Removing that option, he believed that their resolve would be galvanized, and success—now the only option—would be assured. 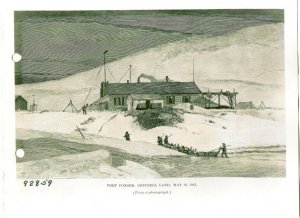 And he was right. That first year the crew created Fort Conger, an outpost of buildings, barracks, and offices. They also meticulously took 500 measurements a day—temperature, wind speed, barometer levels—with unerring precision.

In organizing the endeavour, Greely was prescient of a problem that we all live intimately with today: in a world of endless distractions, can we ever focus on the moment, the person, or the task in front of us? If you were stuck on a train for a few days with only one book, you’d probably read it. Stuck with a bunch of books and a smart phone, most people would likely read none. We talk a lot about living in the moment, though that’s because we have so many options that make being in the moment such a completely difficult task.

That’s the thing about living in the moment. While Greely certainly didn’t think in these terms, the idea nevertheless is there: making the most of what you have means understanding that it’s all you’ve got. It’s the same concept that animates our interest in the Apollo 13 mission, encouraging a level of cultural fascination that we’ll never have for the Apollo 11 mission. Eleven gave us a quote, of course, “One small step for man.” But 13 gave us the better quotes, including one that my kids can recite accurately and gleefully: “Houston we have a problem.” Jim Lovell said that while crammed in a tin can, in space, with two others so close they were touching, realizing that they might never make it back earth. He also said, “We’re not going to go bouncing off the walls for ten minutes, ’cause we’re just going to end up back here with the same problems! Try to figure out how to stay alive!” Failure wasn’t an option, and whining wasn’t either. On a disabled spacecraft, there aren’t any cities of refuge, and perhaps that’s why Lovell and the rest of the crew are still alive today.

As much as we like those kinds of ideas—being in the moment, being proactive rather than reactive—we don’t often choose to live them. When my wife and I began marriage counseling, I mentioned this idea to our counsellor. I felt that, in a marriage, we too often think of the ship there in the harbor, knowing that if things got bad enough we could get on it and sail away. And, yes, there are points in a marriage when leaving seems like a good option. Add kids to any relationship, and things can become strained. Distances, disturbances, confusions. There are so many things that enter a marriage, so many people, so many new experiences and a crush of emotions that inevitably come along with all of them. Added to that, we are constantly surrounded by cities of refuge. The magazines at the grocery store check out are a window, however skewed, onto some of them: better sex, new love, divorce. Tinder, Ashley Madison, and all the other dating apps suggest that there are people out there, thinking the same things, if not just down the street, then certainly no more than a text message away. At weddings we gather our people together in order to watch the marital analogue of the Proteus sail away. Like Greely, we reflect afterward that we are glad that it’s gone. We look forward to stability, constancy, and a future that lacks some of the uncertainties that, prior to marriage, we had been living with. We passed the audition; we got the part. We’ve found the moment that we want to live in, and we’ve decided, together, to get down to the legitimate work. And then we become distracted. When a moment becomes uncomfortable, there are so many alternate realities that we can imagine and ruminate on. “Until death do us part” morphs into “what if?” Seeking a city of refuge becomes less daunting than facing the challenges we’re presented with.

When I mentioned Greely in counseling I was wondering what life would be like if we didn’t have any what ifs. If we could focus on the moment in front of us, free of the ships nagging us from the harbour, and face it alone knowing that it’s our lives that we’re saving. Without the what if, would we be able to address our problems more functionally? In the absence of escape clauses, would we settle down and focus on our legitimate work? For all his faults, I’m inclined to think that Greely was right, and that we could, and that we would.

The problem, sadly, is that Greely’s story doesn’t end there. In July of 1882, the ship that was supposed to bring supplies for the second year was unable to make it through the ice that blocked the way north. People in Washington became distracted with an election, and a war, and other things crowded in. Greely and his crew look to the sea expecting something, yet they see nothing.

In July of 1883, the Proteus heads north again with supplies, but is crushed in ice and sinks in Smith Sound. Greely and his crew head south in search of provisions, travelling in small boats that had only been intended for use gathering information near the camp, never for a voyage on the arctic sea. After 51 days, they arrive at Eskimo Point, having survived most of the journey atop an ice floe. They are excited when they get there, assuming that rescue parties are nearby. But they aren’t. The truth settles in when a few members of the crew travel north to Cape Sabine in search of supplies and find there written documents telling of the fate of the two previous supply ships. It’s now a year after the Proteus was crushed, and it’s the first news they have from the outside world since they first arrived in the far north. What they don’t realize is that no further rescue attempts have been made or planned. They would assume that someone is coming, that they haven’t been forgotten. But they have been forgotten. Or, if not forgotten, then abandoned. That winter, members of the crew begin to die of starvation. Out of hunger and desperation, they begin cannibalizing each other. The success of the first year of the expedition was, entirely understandably, upstaged by the punishing reality of the second and the third.

In time, loved ones raised an alarum, as well as funds, and a competent rescue effort is launched. For most of the team, however, it’s too late. Only six people would survive the expedition. They are greeted with a hero’s welcome, though public perception changes abruptly once the more details of their three-year ordeal become common knowledge. Twelve days after the survivors arrived in St. John’s, the New York Times reported, if not the full details, then certainly enough of them:

“When their food gave out the unfortunate members of the colony, shivering and starving in their little tent on the bleak shore of Smith’s Sound, were led by the horrible necessity to become cannibals. The complete history of their experience in that terrible Winter must be told, and the facts hitherto concealed will make the record of the Greely colony — already full of horrors — the most dreadful and repulsive chapter in the long annals of arctic exploration.”

Nevertheless, in time Greely goes on to other work. President Grover Cleveland appointed him Chief Signal Officer, and in that role he planned and administered the creation of thousands of miles of telegraph wire. Later appointed a General, he administered aid in the aftermath of the Great San Francisco Earthquake. He represented the United States Army at the coronation of King George V. He was awarded the presidential medal of honour during the same ceremony as Charles Lindberg. Life isn’t just another arctic expedition, after all. It’s an attempt at a new science of the world.

One thought on “Living in the moment with Adolphous Greely”