“It sounds weird,” says Baker, “but studies have shown that children who have fathers who read are more likely to become readers.”

To be fair, it’s not just about the fathers. LeVar Burton, longtime host of Reading Rainbow has said “in my mother’s house, you either were reading a book or got hit in the head with one. And my mother didn’t just read to us when we were kids, she read in front of us. … I grew up knowing that this is what we did. You read!”

The point is that children take their cues from us, from reading, to hockey, to crab cakes. Once there, they find something that speaks to them, then they look for the next in the series, and then they branch out from there. But the starting point is us. And, as Baker notes, it’s more about the act of reading, in a sense, than it is about the books. Reading is something we introduce to our children, something we demonstrate as valuable, or enjoyable, or just, you know, a thing that you do. By doing it ourselves we’re also introducing them to the place that reading can have within a life. While the books that we read and loved as children may not be the greatest literature ever to emerge (something that is likely also true of our reading as adults) it’s nevertheless our interest in books will register with our kids. It truly is less about the content of reading than it is the reading itself. It’s about being solitary, quiet, and finding a life within ourselves. It’s about autonomy, and discovery.

“A lot of what you read and come across as a child is discovery, it’s for the first time,” says Baker. “It has that joy of discovery and involvement.” When we are young, we also don’t yet have the patterns of literature truly down pat, so there are no clichés, no tired plot twists or overused adjectives. Everything is new; every story is fresh.

Just like the following stories were fresh to us, all those years ago. 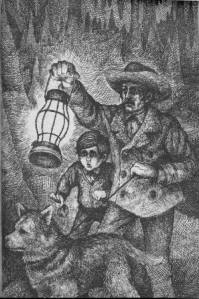 The Great Brain of the title is John’s older brother, Tom, who has a knack of swindling all the neighbourhood kids. John is usually the one to bear the brunt of his schemes. The stories take place in a smallish town were everyone always seems to be sitting out on the front porch. There’s lots of activity in the street, and people have time to gather around to offer opinions on breeding dogs, the smell of outhouses or to grumble about those pesky kids. It’s a pretty rough and tumble life with fights and scuffles, and real trouble to get into. Still, it’s pretty safe, too. The Jenson boys get lost in the Skeleton Caves for two days, but are found, scolded and life goes on.

Going back to this book was like visiting old friends. The writing is smooth and mature, the scenes are vivid and the illustrations by Mercer Mayer are complex, dark and deep. There are eight books in the series, and even now I find it hard not to go from one to the next, to the next. 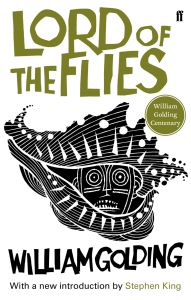 The Lord of the Flies | By William Golding

Golding was a schoolteacher when he wrote this book, stealing moments away from his teaching in order to do it. In his draft, there is a long sequence at the beginning, detailing the nuclear holocaust that leaves the boys stranded, alone, and cruel on an island somewhere near Australia. That part was removed, as was Golding’s working title, “Cry of Children.” It’s not about children, of course, it’s about leadership, and man’s in humanity to man. Or at least Piggly. Kids, Golding knew from his experience as a teacher in the playground, day after day, can be exceedingly cruel. But it was adults that he was really writing about.

Harriet the Spy | By Louise Fitzhugh

“It’s a great book,” says Baker. “It’s innovative. It’s still absolutely germane. The writing is sharp, ironic and honest, and it still makes adults uncomfortable because Ole Golly says sometimes you have to lie,” in order to keep the peace.

Brash and fallible, Harriet is certainly no Nancy Drew, which is what readers noticed when Harriett first appeared in 1964. She keeps notes on the people around her — all in block capitals — and becomes a social pariah at her school when her peers discover them and share them around.

“I’M GLAD I’M NOT PERFECT,” she writes after getting in trouble. That was a big deal to a young reader. By accepting her imperfections, she allowed us to be imperfect, too, and to know that it’s OK.

“It’s a powerful book,” says Ken Setterington. “It’s a classic, and it’s one that I’ve always cared about. It really reaches kids because Harriet is completely different from all other characters in children’s lit. Kids can identify with her, and there is a recognition they don’t find in other books.”

Flowers for Algernon | By Daniel Keyes

In a series of journal entries, Charles Gordon gains intelligence and then uses it. Algernon is the lab mouse that shares Charles’ arc, though ahead of him. The book ends with Charles, again at the place where he started, asking that flowers be placed on Algernon’s grave. If you read it, you may not remember the details, yet that feeling remains. It’s called dread.

Ramona the Pest | By Beverly Cleary

Ramona is the model of a certain kind of child, and to this day remains a great example of the type: she’s a pest, opinionated and forthright. All of which make her great reading for kids. She takes a bite out of a block of butter, says lots of things that she shouldn’t and colours in a library book in the hopes that, if she makes it her own, she won’t have to take it back. Didn’t we all want to do something like that at some point?

Ramona also pays the price of her actions which, to a kid, is exciting stuff. Her parents argue, say the wrong things, and apologize. They’re human too, which feels good for parents to read. With Cleary’s subtle craftsmanship, Ramona remains as fresh and appealing today as the day she was written.

Luke Baldwin’s father dies and he goes to live with his Uncle Henry, the kind of father figure that you don’t want to be: uncaring, misguided, inflexible, authoritative, unloved. Your basic prick. Henry wants to kill Luke’s dog. Luke’s vow is that he never will, and he’s supported in that by a neighbour, Mr. Kemp, who is exactly the kind of father figure you want to be. Caring, calm, wise, compassionate, understanding. He encourages Luke to say what he needs to say, but to do it respectfully, with confidence and resolve. There are a lot of lessons in here about standing up to authority, being assertive rather than reactionary. It’s from another time, perhaps, but the messages, both for fathers and sons, are important. Or at least they should be.

Are You There God? It’s Me, Margaret | By Judy Blume

Blume created considerable buzz by writing about menstruation and puberty. You’d have to do a lot more to get people’s attention today. Still, there just wasn’t that much out there, at least in the 70s, that was as frank as Margaret. She felt a bit lost at sea, perhaps confused about some things and puzzled why adults didn’t seem to understand her or treat her as she felt she ought to be treated. And she had a private life full of personal confidences and desires. That was big.

When asked  what the deal is with the Hardy Boys he said, Ken Setterington says after a sigh and a pause, “well, people read them as kids and they keep them alive by telling their kids they’re going to enjoy them.” And do kids enjoy them? “I think they enjoy them enough.” His tone suggests that, well, maybe they don’t.

There’s a lot to criticise in these books, even leaving off all the slacks and the sweaters. There is no Franklin W. Dixon, of course, that being a pen name for the perhaps dozens of writers who have created Hardy Boy mysteries over the years. Whoever the authors were they traded in words like “jalopy” and nicknames like “Chet” and otherwise allowed us to bask in that sunny glow of 1950s middle class North America — there were no energy crises, or environmental issues, no depression or self doubt, and most everyone was good looking, clean, and smelled good.

But those authors kept the pages turning in part because we wanted to be Frank and Joe, at least for a moment; we wanted to drive those jalopies and to confront real mysteries, and to have a detective for a father. We also simply wanted to be teenagers, and the Boys served up an archetype. 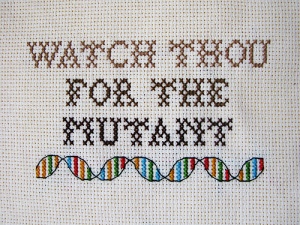 The Chrysalids | By John Wyndham

Today, we — all of us — are increasingly like the Chrysalids, and the book could be a metaphor for life online. In the web, we as people have become dissociated from the Scrabble part of us, or the angry part of us, or our sexual selves. We play Scrabble, rant, and present our sexuality online. Parts of our personas argue with parts of other peoples personas, or play chess with parts of other people’s personas. They have names like Zyngawf_182. But, unlike the Chrysalids, we lack some basic insights, such as the need to be kind, or the understanding that nobody ever has an easy go of it. Which is too bad, actually. Because, instead of looking out for the kindred spirits, we become more like David’s father: we’re ever on the lookout for the mutants. And, just like David’s father, we seem to be spectacularly good at finding them everywhere we look.